Strutting Your Stuff With the Mummers to Welcome 2011! 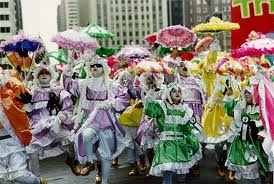 Only in Philadelphia could a tough guy put on a tutu, cover his face with make-up and march down the street dancing and waving a tiny umbrella and not only not be a source of ridicule, but actually inspire respect.

Every January 1st, tough guys (and, since 1983, when they were first officially allowed to march, women) all over the city take part in the walk up Broad Street in the annual Philadelphia Mummer’s Parade, first sanctioned by the city in 1900.

Mummers are to Philly what Mardis Gras is to New Orleans—a unique celebration involving music, dancing, elaborate costumes and fun. Consisting of four distinct groups, the Comic Division, Fancies, Fancy Brigades and the piece de resistance—the String Bands, the Mummers are a prized Philadelphia tradition, with those who participate viewed as true representatives of the city. 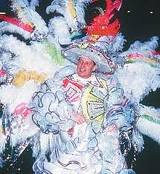 Comic, Fancy and Fancy Brigade clubs present themed performances often based on current events with recorded music and dances while using props and sporting brilliantly colored costumes festooned with sequins, satin and feathers. Each club has a captain who carries an elaborate back piece also representing the club’s theme of the day. Clubs compete for prize money which is used to support the group and stage the next year’s display. Laughter is the order of the day, the goal always being smiles on the faces of the crowd. 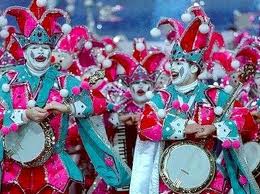 The String Bands, who some consider to be the true heart of the Mummers, share all of the above with the three other divisions but add live music to their performances, which have become quite complex over the years, now almost resembling mini-plays. True Philly Mummers’ aficionados think of the banjo as the quintessential Mummers instrument, but the strutting orchestras are also comprised of violins, bass fiddles, drums, saxophones, accordions and the glockenspiel, a combination creating a truly unique sound. Each band’s production delights the audience with a complete theatrical experience. 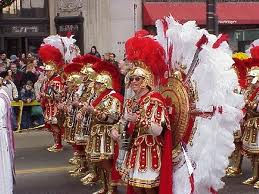 While the parade is telecast live on local TV, nothing compares to a curbside seat to witness the action firsthand. There’s not an HD TV yet invented which can do justice to the magnificent costumes or the toe-tapping tunes, not to mention the festive street atmosphere as revelers sing and dance along, blowing horns and welcoming in the New Year.

This year marks the 111th time the Mummers will take on Broad Street in the City of Brotherly Love. For a uniquely Philadelphia-style New Year’s experience, get up early, put on your “Golden Slippers” (signature Mummers’ song) and get on down to South Philly. (By all means, take public transportation if you can; South Philly parking is a nightmare on a good day.) Grab yourself a piece of curb, and get ready to join the tutu-ed Philly tough guys as the Mummers joyfully welcome in 2011!

What’s your favorite way to ring in the New Year? Click “comments” below, in red, and share!