The iPod–When Size Does Matter 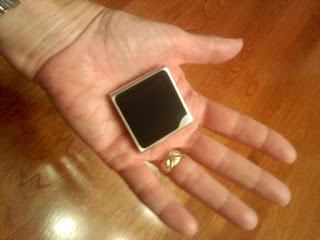 Whoever said size doesn’t matter has never tried to work my iPod.

Actually, I should clarify, as saying it’s “my” iPod would imply that I somehow actively pursued its ownership. In truth, the iPod was given to me by my daughter, Meg, who had another one and received this one in the mail after a recall of the one she had before that.

You follow? If so, please explain it to me, because all I know is that a few months ago, a package from Apple came in the mail for Megan, and she bestowed it on me as a gift.

Frankly, I’m wondering what I did to her to make her want to punish me.

Now, I’m not totally technologically inept. I know my way around a computer, at least enough to keep this blog going and send email forwards, but I still have a cassette player in my car and I use it regularly (Peter, Paul and Mary this morning), so music on an iPod is not only beyond me, it seems borderline sacrilegious.

But when Meg informed me that a new iPod was coming in the mail and it was to be mine, I thought, Well, I retired the pens and legal pads for my computer; I can handle an iPod.

Then again, I was thinking of an iPod as I knew an iPod to be—a rectangular device measuring around 2 by 4 inches—small, but at least visible without a microscope. What I got was a 1.5 inch square that I at first thought was a part sent to repair the broken iPod.

I kept flipping the thing around in my hand, trying to figure out how it was to fit into the broken iPod until I inadvertently turned it on. When it suddenly lit up in my hand, I was so stunned that I almost dropped it.

Fortunately, I didn’t, because I’m certain it would have disappeared into the rug and I would have never seen it again. Instead, I just stared stupidly, waiting for someone to let me in on the joke.

1.5 inches square? Seriously? The thing looks like one of those silver-wrapped Chunky candy bars that fit in the palm of your hand. Of course, the fact that I’m comparing the most current technology to a piece of candy introduced in the 1930s underscores the fact that I have no business messing with an iPod.

Apparently, this miniscule sliver of technological wizardry can do all sorts of stuff. It plays music, both downloaded and on the radio. It has a stopwatch and a timer on the clock. The fitness setting can track a walk or run, telling you the distance, time you’ve worked out and the calorie burn. It plays audiobooks as well as podcasts. And it can also store photos, which are far too small to see, but hey they’re in there.

I’ve tried to figure it out. But I can’t see the screen, my fingers are too fat to accurately select any option and every time I put it down, I can’t find it again. And the itty, bitty power button is too small to find on the thing, anyway.

Meg has promised a tutorial, but I’m anticipating a migraine. And even though I don’t yet wear reading glasses, I’m pretty sure I’ll need to get them before we embark on iPod 101.

I’ll keep at it. But in the meantime, when I’m out for some exercise, I’ll just run until I’m tired. I’ll keep my photos on my computer, set the timer on the oven, which is the only time I use a timer and when I’m in the mood for some music, you’ll find me in my car, where I can actually read the labels on the cassettes as I happily sing along.

Do you own an iPod? Tell us about it by clicking “comments,” below!