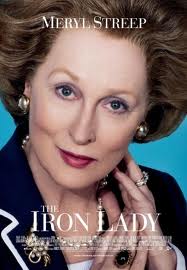 I walked into the theater expecting to see the helmet-haired, stern British politician, the Iron Lady of the film’s title, proclaiming her “pull yourself up by your bootstraps and get on with it” attitude and standing her ground against all oppostion.

And I did, for at least part of the movie. For the other part, I saw my grandmother, in her last years, struggling to hold onto her memory, her mind and her dignity.

Margaret Thatcher was Britain’s first female Prime Minister, leader of her country’s Conservative Party from 1975 until 1990. Dubbed “The Iron Lady” by the Soviets for her tough diplomatic stances, the movie details her entrance into politics after an early life as a grocer’s daughter and follows her trajectory and later resignation from her coveted role as Prime Minister, a fascinating journey, especially for a woman in British public life.

But it is the portrayal of Thatcher’s life post-politics which alternately saddens and disturbs. Now in her late eighties, Thatcher is a mere shadow of her formerly formidable self, fighting to maintain her dignity and independence even as she carries on conversations with her long-deceased husband, Denis.

Merle Streep brilliantly channels Mrs. Thatcher, sinking so deeply into the character’s psyche and skin that it’s easy to forget we’re not watching a documentary. The actress captures every nuance, not only of the fearless politician, but of the fearful elderly woman. Pure acting perfection.

As history, The Iron Lady provides an outline, rather than an encyclopedia, and if you’re looking for a purely historical portrayal, the film may disappoint. It is more than anything a portrait of a life, fully lived and now coming to a close, that viewers observe in all of its pathos.

Thatcher fulfilled her desire that her life “mean something,” also proclaiming, “I simply cannot die after washing out a teacup.” Yet despite her years as her country’s powerful leader, it is precisely this simple act that is one of the closing images of the film–an elderly woman washing out a teacup.

I left the theater feeling a bit wistful, mindful of my mortality as well as of the great and exciting possibilities of a life passionately lived, reminded that we are all here for but a brief time and we should do our uttmost to “mean something.”