The Lion in Winter

I fell in love with medieval times long ago, probably as a child while reading Robin Hood, or The Sword in the Stone. But it was a couple of years ago, upon discovering The Lion in Winter, that my love became a passion from which my last novel Requiem for a King was born.

The Lion in Winter was written by James Goodman in 1966 as a play that was later made into a film starring Peter O’Toole and Katharine Hepburn as Henry and Eleanor. 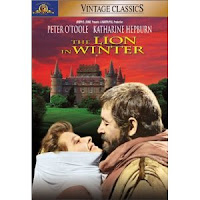 Henry is Henry II the first Plantagenet King. Eleanor, Eleanor of Aquitaine, his queen who was before queen of France when she married Louis, the French king at age fifteen. Her first marriage was annulled when, at twenty-seven, she left his boorish husband for an eighteen year old boy who only three years later became king of England by the sword.

In 1183 when the play takes place, Henry is fifty years old, “an age at which in this time,” the author reminds us, “men were either old or dead.” Henry may be 50 but he is either. Henry is in love once more and, for the first time, he wants peace.

But his love will bring him no peace as the lady he loves is Alais, half sister to Philip, the young French king. Alais was brought to Henry’s court sixteen years ago, when she was a child (“You were seven,” Henry tells her. “Two big knees and two big eyes and that’s all.”) as the future bride to Henry’s son Richard. The marriage never happened, and now Philip has come to see Henry and ask of him either the marriage or the dowry, a piece of land North of Paris of strategic significance.

But Henry fights his demands. He has survived too many battles to give in now. Among them, the one his own sons staged against him encouraged by Eleanor who wanted revenge on her husband for falling in love with Rosemund. Now Rosemund is long dead and Eleanor has spent the last ten years a prisoner in one of their castles. Allowed to join the court this Christmas, she once again will plot against Henry, as will their sons to get the king’s favor and be the next king.

“You can’t all three be king,” Henry tells them.

“All three of us can try,” Richard says.

And as they try alliances are made and broken, and words fly like arrows, barbed arrows of steel and fire, in this powerful play about a king, a lion indeed, still undefeated, facing his winter.

If you thought dysfunctional families was a thing of our times, this delicious play will prove you wrong.