The Nine Lives of Chloe King 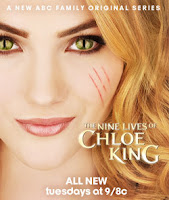 For those of you who used to watch Buffy, the Vampire Slayer back in the 1990s, I have good news: there is a new show on television that may grow up to be an enticing alternative.

The show is called The Nine Lives of Chloe King and debuted this last Tuesday (June 14) on ABC Family.

If you have never heard of this channel and have teenagers in your household ask them, I’m sure they will know about it because ABC Family has introduced among others, The Secret Life of the American Teenager, Pretty Little Liars, and Bend it or Break it. To this list, it has added this week two new shows Switched at Birth and The Nine Lives of Chloe King.

I started watching The Secret Life of the American Teenager with my daughter two years ago and, as is usually the case with us, she outgrew it before I did.

Actually it was while watching this show last Monday that I saw the preview for The Nine Lives of Chloe King and decided to give it a try. I don’t know exactly why because the trailer (http://youtu.be/a3j0KeeQMpU) made it sound pretty predictable: A pretty blonde teenager grows into her superpowers when she turns sixteen. And, the voice over tells us, she must choose between her love (a handsome dark-haired boy) and her destiny.

But the show turned out to be pretty good. For one, the girl in the lead role (Skyler Samuels) is convincing, the scenes where she transforms (gets claws, runs fast, falls on her feet from an impossible height) are realistically done, and the show takes place in San Francisco (my favorite American city).

There is more: the bad guys are creepy; the good guy, interesting; the sidekicks, the right amount of silly.

I even liked the music.

Now for the back story, as you can guess by the title, the girl is half cat, or something like that. She is one of the descendants of the cat Egyptian goddess Bast. There are more descendants, of course. We meet two of them in the first episode. We also meet two bad guys, two members of the secret society intent on killing Bast’s children.

To add extra tension to the already crammed storyline, we learn that Chloe’s possible love interest is the son of the head of said secret society.

And all this happens in just one episode.

I can’t wait to watch more.