We Bought a Zoo and War Horse–Movie Reviews

There’s something about an “animals in jeopardy movie” that gets me every time. I suppose it’s the innocence of animals that put their fate in the hands of occasionally hapless humans, with results that put both humans and animals at risk, that tugs at my heart strings.

In any case, theaters are accommodating my tender heart with two new releases featuring animals as major players in the cast—with somewhat uneven effect.

We Bought a Zoo is the mostly true story of Benjamin Mee, a recent widower who decides that the prescription for what ails him and his two kids (Dylan, the requisite sulky teenage boy and an adorable seven year old girl named Rosie), is a move to the country for a fresh start. What Benjamin doesn’t count on is that his “perfect” house comes with an ailing zoo, complete with sick and depressed animals and a motley staff of characters attempting to keep the place from sinking into metaphorical quicksand.

What ensues is hardly a surprise to the audience—runaway animals, an inspection deadline that threatens to close the zoo for good, dwindling resources and a tension-filled relationship between a father and his sad son—but with the ever-charming Matt Damon helming the ship, the effect is simply delightful. Throw in Scarlet Johansson playing against type as a zookeeper desperate to save the animals, Elle Fanning as young Dylan’s love interest and Thomas Haydn Church as Ben’s skeptical and comedic older brother and the movie effectively covers all of the bases from family film to comedy to romance.

It’s a lot to ask of a movie and here the animals play supporting roles, but We Bought a Zoo delivers. Well worth the price of admission. 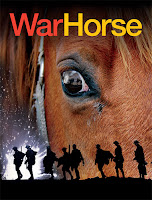 On the other hand, War Horse, featuring the stately steed, Joey, as the star of the film, left me less enamored.

It’s classic Steven Spielberg fare, with a skittish horse bought by a ne’er-do-well fellow looking to one-up his rich landlord. The man’s son falls for the animal, which is deemed totally unsuitable for farm life. But just when it seems all is lost, Joey gallops to the rescue, plowing a field full of rock so the almost destitute family can save their farm.

Of course, if things resolved there, it would have been a short movie, and devoid of the animal in peril theme. Alas, a storm ruins the crop, forcing the farmer to sell Joey to an army officer who takes him off to fight in World War I. Cue perilous situations, multiple caretakers of the horse and animal abuses which left me covering my eyes until my husband said it was safe to look.

And of course, Albie, Joey’s devoted owner, eventually joins the conflict in search of his horse. Does the boy survive the war? Does the horse? Is the boy reunited with the horse? Is this movie by Steven Spielberg?

Despite its grand themes and comely animals, War Horse left me feeling a bit flat, with every scene as predictable as the finale, on a windswept Scottish hillside, with the characters backlit by a setting sun. As my husband aptly put it, “It was like watching My Friend Flicka. But with a war.” I couldn’t have said it better myself. Not a bad movie, but when you know what’s coming from the first plaintive note of the violin’s background music, it’s a bit disappointing. And it had no Matt Damon to serve as eye candy.

If you’re looking to plunk down twenty bucks at the movies this week, opt for Matt and We Bought a Zoo. As much as I love animals, this time, it’s the humans who make the movie.

Share your thoughts on current releases by clicking “comments” below!