What a Shame–And It’s About Time 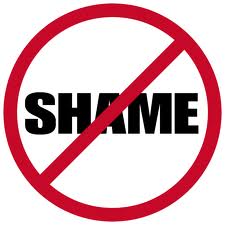 Shame. Embarrassment. Humiliation.
The hat trick of negative emotions were all experienced last week by the 14-year-old teen forced by his mother to stand in front of their home wearing a sign proclaiming, “I lie, I steal, I sell drug(s), I don’t follow the law.”
At least I hope that’s what he was feeling.
Indiana mother Dynesha Lax resorted to the unusual punishment after several frustrating encounters with the local court system, when her son received minor slaps on the wrist for multiple offenses.
With her son showing little remorse or inclination to change his ways, Ms. Lax took matters into her own hands. Noting that her son might have been trying to impress other teens with his behavior, the mother said, “You’re looking for attention, we’re going to get you attention.”
Several passers-by objected to Lax’s methodology, calling police to complain about the punishment.
I think the woman deserves a medal.
When I was a kid, I frequently heard my grandmother exclaiming that someone “should be ashamed” of him or herself for some offensive behavior. If it was a direct admonition, usually pointed at one of my cousins, the offender hung his head, shuffling his feet until he was dismissed with a disgusted “You better behave yourself or I’m gonna biff you!” I won’t say that recipient of the scolding never committed another offense, but I believe my grandmother’s watchful eye and liberal use of shaming kept more than one family member from a permanent perch on the wrong side of the law.
Likewise, my parents made sure that we knew what acceptable behavior was and if we crossed the line, the shame, whether administered by them or self-inflicted, was immediate. (I was once so ashamed of myself for sneaking a look at another kid’s test paper that I deliberately wrote down the wrong answer. True story.)
But somewhere along the line, shame became a dirty word. It’s a lousy feeling, to be sure, but from the looks of the world, we need to reintroduce it, along with embarrassment and humiliation, back into the vernacular in a big way.
From the moment our kids leave the womb, we fall all over ourselves to reassure them about how wonderful, perfect and beyond reproach they are. In pre-school, each of my children had to make an “I Am Special” poster, extolling their virtues and proclaiming their magnificence. I mean, they were three. Just how fabulous could they be?
To be sure, kids are a gift and we need to instill self-confidence and blah, blah, blah, but no kid is the second coming of Christ, at least not yet. One of my friends, after helping her third little one create the “I Am Special” poster told me she wanted to say to her son, “Yeah, yeah, you’re special, I’m special, we’re all special. Now get over yourself and get on with it.” Fortunately for her three-year-old, she held her tongue.
Unfortunately, all this “specialness” has birthed a shame-proof society. Embarrassment? Humiliation? Instead of shunning the words, people aspire to them—just look at those idiots from The Jersey Shore and Keeping up With the Kardashians if you need proof.
That’s bad enough, but when the lack of standards or a conscience crosses over into criminal territory, things really get scary.
Dynesha Lax gets it. In her words, “I’m not going to let the streets have my son….I figured if I knock him off his high horse, it would give him a reality check.” If making her son ashamed of himself saves him, Dynesha should get a Pultzer Prize or something.
But if that’s not forthcoming, I think I’ll make Dynesha her very own “I Am Special” poster. She’s one person I can think of who actually deserves it.

Article first published as What a Shame–And It’s About Time on Technorati.