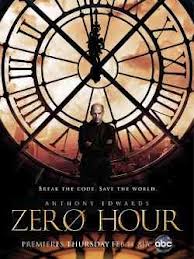 Think of it as the DaVinci Code with clocks.

I’m just not sure all the parts will add up to a whole, instead of a mish-mash of bits and pieces.

At the program’s beginning, we’re in Nazi Germany, in a room with clock makers and priests. Cut to a hospital with the priests disguised as doctors where they observe a baby “not born from any womb” and with really freaky eyes.

They’re discovered, they run, and pretty soon we’re back in the church, where they decide it’s time to remove whatever it is they’ve been hiding submerged in what looks like a sewer. They load it onto a truck just before the Nazis break into the church, murdering the priests as the truck drives off.

Cut to the present day and Edwards, sensitive leading man formerly of E.R. fame, is canoodling with his wife on a New York street before heading back to his office as owner of Skeptic Magazine. And since his wife is soon kidnapped because of a mysterious clock, a diamond with a map on it and a whole lot of mystery, Edwards’ skepticism is put to the test. A priest friend of Edwards who recognizes a supposedly dead language on the diamond map, a wanted terrorist and an FBI agent hungry for revenge figure into the mix, along with Edwards’ two young, eager magazine staffers.

Soon, the hunt for Edwards’ wife begins and trans-continental travel, lots of people with accents and surly attitudes and a mysterious (there’s that word again), organization are all swirling around with talk about Jesus, the twelve apostles, a secret, the end of the world and who knows what else.

If you’re a fan of convoluted mysteries, you may be intrigued. Frankly, I’m not sure I have the stamina to stick with Zero Hour until its resolution. I may give it another try and I’ll keep you posted. Then again, maybe I’ll just rent the DaVinci Code again and call it quits. Two hours is way less a time investment than 13 weeks when the result is the same–I won’t know what’s going on regardless.