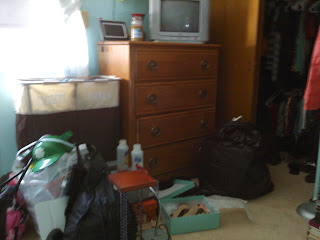 “Enter At Your Own Risk.”

Despite valiant efforts brought on by spring’s annual “urge to purge,” certain rooms in the Bontempo residence have become so overrun with “stuff” that I’m considering posting warning signs.

Anyone brave enough to enter should do so only sporting hardhats and hazmat suits. Safety cords firmly attached to something outside the room in question are strongly recommended if you want to be certain you’ll find your way out—should you swallow your fear and go in (which you shouldn’t, but if you must).

No, we’re not candidates for the next episode of Hoarders. (Really that show is disgusting. Don’t watch it if you’re planning on eating that day.) The culprit is one tiny girl who has moved home after four years away at college.

Little Meg has graduated. She did so with honors and we’re thrilled. What’s not so thrilling is the stuff this petite girl (5’ 2”, 107 lbs.) has lugged home with her tiny frame. And I have to find a place for all of it in a house already bursting at the seams with 24 years of life.

I could likely manage the stuff of one kid, but the older two came back to roost five and three years ago respectively, bringing trappings equal to Meg’s recent contributions and, well, you do the math. This is one packed domicile.

My logic in absorbing the smorgasbord of mismatched furnishings, bedding, artwork (?!), etc., was simple: The kids will need this stuff again when they move out into their first apartments or houses.

Of course, that thinking requires them to actually move out, which is not happening any time soon, and to want to outfit their spaces with the stuff we’ve accumulated, which they don’t, as they assume they’ll be buying everything new, with the money they intend to print in the basement.

To be honest, before Meg returned, I was tempted to tell her to bring only herself and her clothes and leave the rest at the curb outside of her rented house. The only reason I didn’t make her follow through is because that line of thinking is apparently illegal, a statute no doubt introduced after hoards of college kids and their parents abandoned questionable possessions upon graduation, creating pop-up curb cities around the town. Turns out, West Chester didn’t want Meg’s or any other graduate’s junk, either. 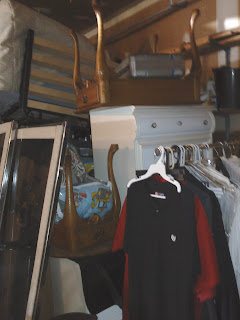 So once again, we’ll be moving stuff to make room for more stuff, creating live-action Jenga sculptures balancing precariously throughout the house. Make sure you really need those shoes before you grab that shoebox.

And should you or anyone you know need to furnish a house—or three—come on over. Just remember to bring your hardhat.