A Middle Aged Woman Laughs at (and Escapes from) a Crowded House
By:  Mary Fran Bontempo

To hear an audio podcast of today’s column, click the play arrow below. 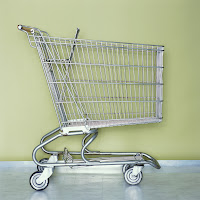 I was at the front door, keys in hand, about to turn the knob, when I heard my husband’s panicked voice.

“Wait! Where are you going?”

“I’m just going to the grocery store. Why? What’s the problem?” I asked.

“Don’t leave without me! Let me grab my coat. I’m coming with you,” he all but shouted.

Before I had time to respond, Dave was at my side, ushering me out the door. “You did hear me, right? I’m going to the grocery store,” I said.

“Oh I heard you, all right. And there’s no way you’re going without me,” he added.

I looked at him and put my hand to his forehead. “Are you feeling okay? I’ve been going to the grocery store for this family for almost thirty years and whenever I’ve asked you to go with me before, you’d break out in a cold sweat and start twitching.”

“Why is now different?” I asked.

“Why? Have you been in our house lately? In case you haven’t noticed, for the past month, the kids have been home. All of them. All of the time,” he said.

He had a point. Since mid-December, when college break began, our youngest daughter had returned home, joining her already in place older sister and brother. And while having the three kids in residence made for some happy family time, it also made for some close quarters. Really close.

As we drove to the store, I agreed. “I admit having the three of them home has been interesting. Given the fact that I can’t send them to their rooms or put them down for a nap any more when they get cranky, things can get a little dicey. But you? Volunteering to come to the grocery store? I never thought I’d see the day,” I said.

“Well, prepare to see more,” Dave said as we grabbed a cart and made our way to the door.

Sure enough, we hadn’t gone farther than the produce aisle when we encountered Ed and Anita, acquaintances whose kids had gone to high school with our own. Dave and Ed looked at one another simultaneously and nodded. “Kids home?” Dave asked. “Yep,” Ed answered, with a sigh.

“Hmmm, let’s see. There’s stuff all over the house, they’re in and out at all hours of the day and night, I can never find anything, there’s always something in the washer and we never have any food, milk or toilet paper, which is only part of the reason we come here,” she answered.

“Yeah, the other part is that we just have to get out of the house,” Ed added.

“I hear you,” Dave said. “It’s a lifeline. Who would have thought?”

We commiserated for a few more minutes before parting ways, us towards the laundry detergent, Anita and Ed towards the paper goods. By the time we reached the dairy products, we’d come across three other couples, all with houses full of grown children home on break or just back in the nest, another common lament. Dave also silently nodded to two other men we encountered in the store, presumably with their wives.

“Who were those other guys?” I asked.

“What? All the time? You mean you even come here without me?” I asked.

“Hey, it’s no big deal. I could be going to a bar. Be thankful it’s just the grocery store,” he said.

“Is it really that bad? Or are we overreacting?” I said.

“Let’s just say the world has conspired to realign our expectations. When we were their ages, we were married. Things just seem to take a lot longer these days. Of course, it could be worse. We’re lucky to have a house with three floors. At least we can spread out. Plus, I don’t expect they like being stuck at home any more than we do,” he added.

“I guess you’re right. Everything will work out eventually and with any luck, they’ll all be on their own before we’re in wheelchairs and on oxygen,” I said.

Until then, though, if we’re not at home, look in the grocery store. We’ll be the ones catching up with our friends, nodding at strangers and re-stocking. Again.

How full is your nest? Feel free to vent by clicking “comments” below, in red, and share!