Back to the Future–On My Bike 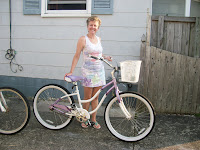 With each passing birthday, though I’m physically a year older, mentally, even emotionally, it’s a different story.

I’m not talking about senility, yet, though I have my share of what’s euphemistically referred to as “senior moments.” You know the ones—mid-sentence you can’t remember what you were talking about; you walk into a room and suddenly you don’t remember why you went in there; you can’t find your glasses and they’re on top of your head.

So…what was I saying? Oh, right, regressing. No, I’m talking about the fact that the older I get, the more I want to play.

Having passed the mid-century mark (Oh, that still rankles!), I’ve come to realize that seriousness is seriously overrated. As youths, we’re in such a hurry to grow up, to take on the world as adults. Of course, once we get there, we realize how great we had it as kids. As always, youth wasted on the young.

Now I’ve decided, whenever possible, to go back. To be a kid, or at least act like one, again.

My husband is fully on board with this enterprise. (Really, he’d be on board with anything that directs my focus away from him.) To that end, for my fifty-first birthday last week, Dave bought me a new bike.

This is not just any bike. Nor is it an “adult” bike a la Lance Armstrong, replete with gears and speeds and, heaven forbid, hand brakes. No, this is my six-year-old dream bike, sized and modified to fit my decidedly not six-year-old body.

My new bike is purple, my favorite, six-year-old color, with white hibiscus flowers on the frame and seat. It sports a white basket set jauntily on the handlebars and most important, it has a bell. The bell is not quite the same as that on my six-year-old bike—it “dings” rather than “brrrings,” but, I have a bell on my bike!

The handlebars, set high and wide, let me sit erect on my bike’s padded seat (Did I mention that it has flowers on it?!), no hunching over, no lower backache, and I can actually see where I’m going, even look around while I pedal, instead of staring only at asphalt whizzing by.

In fact, on this bike, there is no whizzing; there’s only cruising—my bike is a “cruiser,” underscoring its purpose. At fifty-one, I figure I’m due for a little cruising, especially since the last few years felt like pedaling directly up the side of Mount Everest.

I remember my youthful determination to master a two wheeler. For a six-year-old, learning to ride a bicycle is akin to getting a driver’s license. It’s the first truly independent form of transportation available to a kid. (Tricycles don’t count. A mom can outrun a trike.) Even the symbolism, of a parent pushing a child forwards as the kid wobbles uncertainly before finding her balance and gliding ahead, speaks volumes.

As a child, I knew my bike was my key to freedom. It didn’t take me far, just around the block, but while I was riding, my mother never knew exactly where I was. Was I in front of the Rielly’s house or just passing the Warren’s? Maybe I was at the far end of the street, lingering just a moment and savoring my independence. Either way, I was on my own, with license to explore my world.

It’s not much different today. Of course, now I can cross the street, so that expands my territory a bit. But slowing down again and pedaling my way around on a bike takes me back to when a pretty garden would make me stop and literally smell the roses, which I do. I notice things that wouldn’t get a second’s attention were I in my car. And I love the fact that it’s all me, powering, steering and guiding my bike to new horizons. Or maybe just really seeing my horizons for the first time in a long time.

Riding my bike, I’m a kid again. And from my perch on my flower-covered, purple seat, everything old is new again. Even me.