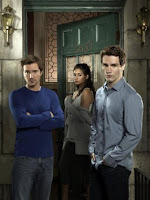 I watched a series premiere on Monday and a series finale on Tuesday.

Not so long ago, the new season ran from September to May with a couple of annoying breaks in between. Not anymore. Now shows pop up at any time and end when you least expected it.

I have stopped trying to make sense of it. I just tell my smart new TV to record the programs for me so I don’t have to worry.

The series that ended (Life Unexpected) I reviewed last year. I liked this second season too, but I was sorry to see the series has not been renewed, as they added a “Two Years later” five minutes wrap up at the end of the finale that was clearly a goodbye.

I will miss it.

The new series (Being Human) is a remake of a British show that can be seen on BBC America. I have not watched the original, but the Philadelphia Inquirer review of the American version piqued my curiosity enough to give it a try.

It was… interesting. Interesting enough to follow the series I am not sure. But pilots sometimes do not do justice to the show, and this one intrigued me enough to give it a try next week. If nothing else, it has a character who is a vampire. Which mean I can always justify my watching it by calling it research.

Besides the premise is original: A vampire, a werewolf and a ghost sharing an apartment. The vampire has an evil sire who wants him back, the werewolf has a sister who is about to learn the hard way why he disappeared, and the ghost has an ex-fiance who doesn’t know she is a ghost.

They are young, they are cute and they are on in the Syfy channel at 9 PM on Mondays.

We’ll see where they go from there.