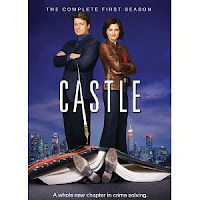 Mary Fran is right: most TV shows are painful to watch. That is why I don’t watch random TV. By random TV, I mean sitting in front of the TV set when I’ve some free time and surf the channels. But every season I do follow certain shows that catch my fancy, as Castle did last year.
Castle (Nathan Fillion), first name Rick, is a mystery writer, the kind of writer that spends most of his time plotting how to kill people. By requirement of the script, he’s paired, in the pilot episode, with Kate Beckett (Stana Katic), a young, and beautiful female detective, and, from there, off they go to solve cases, pushing each other buttons, and creating enough electricity to warrant a second and third season.
Castle may not be the best show on TV, but it’s a lot of fun, and, as a writer, I love to share vicariously the fantasy world of an author, so successful he can afford a penthouse apartment in New York City and have the major on his speed dial.
If you are not familiar with this show and think you might like it, you may want to catch a new episode Monday April 5 at 10 PM or watch an old episode right now on hulu.
Hulu, in case you wonder, is a website (www.hulu.com) that allows you to access most shows after they have aired “with limited commercial interruption”, as the alien-sounding voiceover informs you.
Now, TV without commercials and at my convenience, that is my kind of TV.
Mary Fran Bontempo2018-10-30T09:57:45-04:00April 2nd, 2010|0 Comments