Catholic School Closings—End of an Era 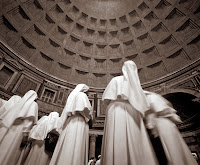 With the exception of their shame-faced sabotage of the Nazi vehicles in pursuit of the beloved Von Trapp Family, the nuns in the movie The Sound of Music were positively angelic, serenely walking around their abbey and singing, wondering what to do about their “wild-child,” Maria.

I had a slightly different experience.
As a six-year-old Catholic school child growing up in Northeast Philadelphia, I found myself staring at a terrifying alien creature who resembled nothing so much as an angry penguin on my first day of grade school. We kids were seventy-two strong, crammed into seven rows of desks ten deep and of a number enough to send a teacher in one of today’s classrooms screaming from the room.
But there we sat, hands folded on the edge of the desk in front of us, struck mute by the sheer force of the tiny, yet rotund figure standing sternly before us. Sister Marita Roberts, hair hidden beneath her veil and body camouflaged by a dark blue habit covered by a round, white thing that looked like an adult sized bib, silently dared us to utter a sound.
We didn’t.
What followed for me was sixteen years of Catholic school (yes, a Catholic college as well) and a complete indoctrination into a culture and a way of life that, bit by bit, is starting to disappear. And despite my initial childhood terror, I’m sorry to see it go.
Late last week, the Archdiocese of Philadelphia announced the closing of four Catholic high schools and forty-four Catholic elementary schools. My high school was one of the institutions on the list.
I attended St. Huberts Catholic High School for Girls, graduating in 1977 with a class of 650 young women by my side. Currently, the entire school has a population of 675 students and is operating at only 40 percent of its capacity. As with the other schools, the archdiocese has decided that in order to salvage the system of Catholic education in Philadelphia, it’s now necessary to close and/or merge many of the institutions that were second homes to generations of families.
I understand. Without some serious belt-tightening, it would be just a matter of time before the entire Catholic school system would be nothing more than a complex group of trivia questions, with answers known only to those of us who identified each other by home parishes and grade schools. “I’m from St. Matts.” “I’m from Ransom.” “I’m from Resso.” (Resurrection of Our Lord for those not in the know.)
But the loss of neighborhood grade schools and then the high schools that would welcome older students cuts to the quick. We were a family with a shared history and culture. We had the same stories—maybe a few different details, but every Catholic kid knew some altar boy who drank the altar wine and then had the stuffing beat out of him by a nun. (Like I said, our nuns didn’t float around singing.) We all suffered through the panic over attending confession—entering that dark cell-like closet, waiting for the priest to intone our penance for our grievous sins. (“How many Hail Mary’s did you get?”) Every one of us prayed that we wouldn’t get the priest who branded students’ foreheads with a giant black cross on Ash Wednesday.
Okay, we were a weird family with questionable stories, but we were still a family.
But things change. Fewer schools may mean that even fewer children will grow up with the memories of being a part of something so special, so unique. With the Catholic Church in such disarray, perhaps this was inevitable; perhaps this is the beginning of the end of a lifestyle that’s time has passed. But maybe the schools that remain will grow stronger, affording future generations of children the opportunity to create their own unique stories about growing up in a Catholic school.
I hope so. Regardless of the outcome, though, I’ll continue to recall my Catholic education with fondness—terrifying nuns, giant black crosses and all.
Mary Fran Bontempo2018-10-30T09:53:20-04:00January 10th, 2012|1 Comment