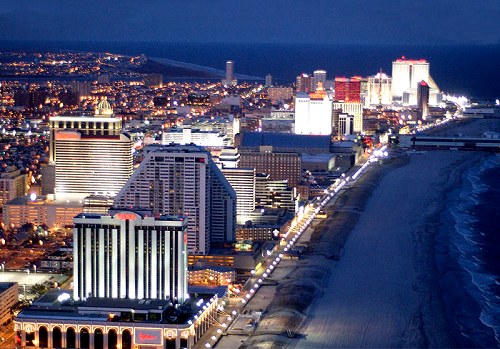 To lure the wary to Atlantic City, slick promoters have been telling regional folks to DO AC (ie, Do Atlantic City). So much to do and see and enjoy there, they say. And more and more, they’re right.

So we headed down there again this past weekend. It was not for our own sake. In fact, I thought about going down there again and had other visions in mind for the weekend. But we promised to sign our son and friend(s) into a room for the evening. They’re old enough; not trying to pull any funny business there. It was just that my husband’s promotional code happened to score a cheaper room. Of course, they had to save their money for the big night: Barstool Blackout it was called. You can only imagine the scene as DJs spun music while canons shot streams of foam into the crowds. Sorry I missed that one.

What I did enjoy however, was some quiet time (believe it or not) on the roof terrace at the new Revel Casino. It’s not only new, clean and nice, it’s one of the few casinos that actually has sitting areas—beautiful sitting areas—on decks, rooftops, next to firepits and beach gardens. I went there while hubby played craps for awhile at the Showboat.

We had a dinner reservation at a restaurant we hadn’t been to before and the plan was to meet up before dinner. Not having heard from hubby since he hit the casino floor, I decided not to be a bad luck charm, and wait until he contacted me. Well, he didn’t. And for good reason. When I finally sought him out, he was on a giant roll. Clapping and cheering came from the table, and I knew something good was happening. There, in front of him were dozens of chips in every color. And we wound up heading for dinner with an extra $4000 in our pockets (or rather, his pocket).

So our dinner just got nicer as we headed into Scarduzio’s. It’s an upscale restaurant in the Showboat Casino. It was an unexpected surprise, as we ordered a very nice bottle of wine and sat down to an equally nice meal—beef and seafood. Scarduzio is a fairly well-known chef in the region and partner with Georges Perrier in one of the other nicer eateries in town—Mia’s.

Even when life seems to be the same old, same old, you never quite know what’s going to happen. What began as a ‘duty’ to help our son actually turned into both a relaxing and lucrative outing. It’s funny, but one of my children’s books has a lesson in trying new things and sometimes going with the flow because you might actually wind up enjoying something.

Good lesson for us all.