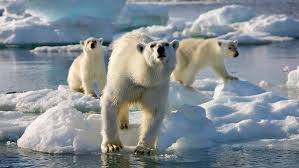 It’s the perfect way to experience snow and ice.

Despite an incredibly mild winter, I’m still more than ready to say goodbye to the season of freezing temperatures and paralyzing storms, unless, that is, I’m watching the wind whipping and the flakes fall on the Discovery Channel’s new series, Frozen Planet, airing at 8 PM on Sundays.

From the makers of Planet Earth and Life, Frozen Planet explores the Earth’s polar regions with breathtaking photography and a view into life in the most forbidding parts of our world.

Visually stunning, the program, a co-production of the Discovery Channel and the BBC, was several years in the making and subjected the videographers to all of the extremes of the poles’ weather conditions. Thankfully for viewers, their determination and stamina resulted in unprecedented footage revealing the drama of life at the edges of the Earth.

Narrated by Alec Baldwin, Frozen Planet examines the changing seasons as well as the changing climate and the effect on the regions’ wildlife. It’s a compelling, awe-inspiring series that will leave you breathless and grateful for our more temperate weather.

Enjoy the trailer of Frozen Planet below and be sure to catch the program (it reruns throughout the week on Discovery) Sundays at 8 PM.