Headphones Insure that Silence is Golden
By: Mary Fran Bontempo 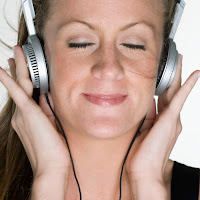 I want a job with headphones.

And I’m sure some of those jobs would be really cool. But I don’t want them.

No, I want a job with the kind of headphones through which is heard nothing but silence.

It was the middle of another chaotic, and thus, ordinary day in the life. My life, that is. All sorts of stuff was going on, from phones ringing, to people coming in and out of the house, to the dog barking, to still more people yelling at some computer glitch, to the washing machine making really weird noises, to the roaring of the landscape guys across the street revving up their mowers and leaf blowers, creating the greatest racket of all.

I thought my head would explode and I wondered how the landscape guys could work every day without their own heads spontaneously combusting. That was when I noticed the headphones. Every guy wrestling with a screaming machine sported a pair of headphones to protect their ears. And that wasn’t all they were wearing.

Each fellow wore on his face a remarkably unperturbed, Zen-infused expression, despite that their equipment was making enough noise to rattle the birds from the trees. Intently focused on the job at hand, they each moved through their mission oblivious to any distractions. By contrast, I couldn’t break through the din in my own house long enough to remember what I had come into the living room for.

That’s when I knew I wanted headphones. First thing in the morning, right after fixing my hair, I’d position the headphones on my noggin, making sure the ‘do was still perfect, of course. Then, down the stairs, directly into the kitchen for my tea and newspaper, oblivious to any wailing lobbed in my direction. A twenty minute easing into the day with no bellyaching that we’re out of milk or juice, no “I can’t find my whatever,” no nothing. At least no nothing that I would hear and therefore have to do something about.

After breakfast, the day would be my own to steer through as I chose, with no ringing phone, no whining dog and no whining people to attend to. I could do as I pleased, or, if not exactly as I pleased, at least get through my daily grind without prolonging each activity ad nauseum due to countless interruptions.

The more I thought about it, the more I was convinced that noise obliterating headphones should be standard issue equipment for every woman on the planet. Can you imagine what we would collectively get accomplished in a single day? Give us a month and half of the world’s problems would disappear.

Of course, those problems would be replaced by the ones created when we ignored the cacophony of requests assaulting us as we blissfully attended to our own business. And the world would be even more of a hot mess than it is already.

On second thought, I always did want to drive one of those high powered mowers. Maybe I’ll just see if the landscape company is hiring.