How Not to Celebrate Independence Day 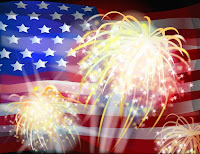 As an American, I have the right to carry a gun, through some questionable interpretation of the founding fathers’ decree that we citizens have the “right to bear arms.” Supposedly, there are safeguards in place to allow only those of us who are of sound mind to own a gun. (Does that sound like a contradiction?) But considering the fact that a few years ago, a ten month old baby in Illinois obtained a gun permit, I don’t have much confidence in the safeguards. I think I’ll skip the weaponry and just carry a good book to the beach.

As an American woman, I, unlike women in more repressed societies, have the right to dress in whatever manner I choose. However, I think I’ll pass on the skimpy bathing suit that would show more of me than the world cares to see. Likewise, I’ll opt for footwear that I can actually walk in, as opposed to teetering around on heels high enough to give me a nosebleed as well as threaten the lives of small children near me should I fall off of my shoes. And, though I won’t go so far as to wear a burka, it’s safe to say that I will at least keep my underwear “under” my clothes, unlike those exercising the “thong showing above the pants” or baring your bum for the world to see a la Venus Williams freedom.

As an American, I have the right to sue just about anyone I wish for just about any ridiculous reason. Remember the lawsuit instituted by Judge Roy L. Pearson, Jr., an administrative law judge in Washington, D.C. in 2007? Pearson sued a dry cleaner that he alleged lost a pair of his pants in 2005. The amount of damages claimed in the suit? $54 million dollars. (When I told my daughter about Pearson’s lawsuit, she asked, “Was the bottom half of his body still in the pants?”) Instead of trying to figure out how to get rich by milking the legal system and making a fool of myself in the process, I think I’ll just enjoy a day off from work and buy a lottery ticket. By the way, Pearson lost, thank God and the American justice system.

As an American, I am fortunate to live in a country blessed with an abundance of . Almost daily, it seems some new gadget is introduced to make our lives easier, provide us with more information faster than before, or simply entertain us at every possible opportunity, ensuring that we are never, ever unplugged for a single moment. This Independence Day, I think I’ll disconnect for a while, maybe even for the whole day, and literally go fly a kite, or take a bike ride, or bring that book to the beach. Anything but update myself on the latest Hollyweird scandal.

As an American, I am free to complain or whine continuously about anything and everything, from the government, to the price of gasoline, to my spotty cell phone service, to the long lines at the grocery store and the disappearance of every single hot dog roll from the shelves. (I knew I should have picked those up last week.) This Independence Day, I think I’ll stop looking for reasons to be offended and remember how lucky I am to live in a country where I can make fun of the President and not have my tongue cut off.

Yes, this 4th of July, I’ll thank God that even though I live in a country where I can act like a complete nitwit whenever I choose, I can also choose not to. Happy Independence Day!