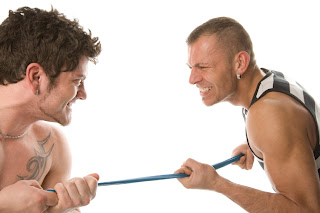 Call me crazy, but I don’t think Paul Ryan is Joe Biden’s friend.
During last Thursday’s Vice Presidential debate, Vice President Biden referred to Congressman Ryan as his “friend” a total of 14 times within the 90 minute slug-fest.
Oh sure, Joe was smiling as he said it, which is what you usually do with friends. In fact, Joe smiled a lot during the debate, prompting me to put whitening strips on my shopping list this week. Whatever else you might think about the Veep, his pearly whites are really pearly. And white.
Biden also laughed a lot, another thing you do with friends. But friends usually laugh with one another. Paul Ryan was definitely not laughing with Joe Biden.
Plus, there seemed to be a lot of yelling and talking over each other. Now, I come from an Italian family, and growing up, there was a lot of yelling and trying to talk louder than whomever you were sitting next to at dinner. There was a lot of love, too, but mostly yelling. And indigestion.
Seems yelling is fairly common among people who care about one another. If you’ve ever seen that profoundly annoying NBC show Parenthood, about “the very large, very colorful and imperfect Braverman family,” everyone is always talking over each other and yelling. Apparently, it’s just how they communicate and show their love.
I couldn’t take all that love; it gave me indigestion even if I hadn’t eaten anything, so I don’t watch the program any more. But given the endearing term “friend” along with all the yelling and talking over each other and smiling and laughing, I wondered if Joe Biden was just trying to tell Paul Ryan how much he loved him.
I looked up the word “friend” on Dictionary.com to see if any of the meanings applied to what was going on between Joe Biden and Paul Ryan last week. There were several definitions:

1. a person attached to another by feelings of affection or personal regard. Um…nope.

2. A person who gives assistance; patron; supporter. I don’t think Joe was assisting or supporting Paul, but maybe that’s just me.

So, I guess V.P. Biden has another definition for the word, “friend.” That or he’s a closet Italian.

Either way, the next time someone calls you a “friend,” I’d sleep with one eye open. Because with friends like that, you don’t need enemies.

Article first published as Joe Biden and His “Friend,” Paul Ryan on Technorati.