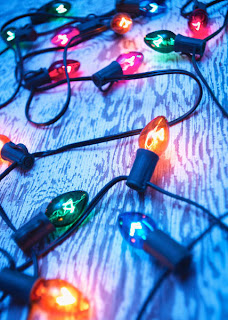 Did you ever fight something ferociously, only to know deep inside that you’re doomed to lose?
For me, it’s the annual Christmas decorating battle. The mere thought of crawling on hands and knees, clawing my way through the attic and closets to retrieve the mountains of Christmas crud makes me break out in a cold sweat.
Every year, I swear I won’t give in. And every year, I do.
When I was a kid, I was furious with my father for refusing to drill holes in our window frames and hang strings of lights like all the other families in the neighborhood. Instead, we had to be content with putting a few stupid fake candles in the windows. One year, I upped the festive by buying multi-color blinking bulbs for the plastic candles. It was pathetic.
But Dad, wherever you are, you never looked as smart to me as you do now when I’m standing precariously perched on a ladder, pinching my fingers, stringing lights across the gutters at the front of the house, swearing all the while. That’s pathetic.
I started the insanity years ago, when my kids were babies. Now, I don’t know how to stop.
So here’s a little Christmas ditty for all of you who share my desire to ditch the decorating lunacy and slap a fake candle or two in the window. Maybe if we band together, we can start a movement. Or maybe not. Either way, here goes….

I thought when the kids grew up
That I’d pass all this junk on to theml
But with everyone still at home,
I’m stuck with it ’til who knows when?