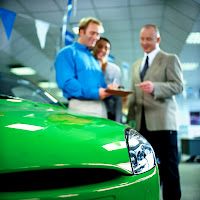 The car salesman giveth and the car salesman taketh away.
Buying a car is huge, especially if it’s your first car. At least that’s what we thought, until the manager of the car dealership told us it’s not that big a deal. But I’m getting ahead of myself.
Our middle child, Laura, at times appears snake-bit; for whatever reason, this is the kid for whom the simplest of things turns into a Herculean effort frequently requiring major readjustments in any plan as well as reinforcements to get over the goal line.
It’s turned out to be no less true now that she’s intent on buying her first car.
She’s been looking for months, performing her due diligence as to used or new, make, model and so on. So when she asked me to accompany her to a Mazda dealership, ready to buy, last week, I agreed. (Given her history, I agreed with some trepidation, but I agreed.)
At first it looked as though the usual string of false starts would continue. Armed with a certificate from our insurance company, she entered the showroom thinking she would be able to get a new car for a really great price, which of course, turned out to be false, as she wasn’t a veteran of the armed forces, no one in our family owned a Mazda and her eyes are blue instead of brown. Okay, I made that last one up, but the golden ticket was dependent upon a number of incentives, only one of which she qualified for (she’s a college graduate).
As we walked out of the store, Laura near tears, the door behind us suddenly opened and a well-dressed guy called after us.
“Excuse me, was there a problem? I’m the general manager; maybe I can help you.”
“No, the other salesman didn’t do anything wrong,” Laura said. “I just came in here with this certificate, thinking I could get a car at this price but I don’t qualify for the incentives. I can’t afford to go higher than this.”
“Look, I may be able to do something for you. Why don’t you come back inside and let’s see if we can make this deal happen.”(Note: Whenever someone says to you, “Let’s see if we can make this deal happen,” run. Run like the wind.)
The G.M. showed us into his office and introduced himself, which should have been our second red flag. He shared a first name with one of Laura’s particularly loathsome ex-boyfriends. So loathsome, in fact, that Laura has decided anyone with that first name should automatically have the last name “666.” (Note #2: If someone tells you their name and your gag reflex kicks in, run. Run like the wind.)
Long story short, G.M. made many promises, including securing an interest rate for Laura that was much better than the one for which she’d been pre-approved. I’m assuming this miracle worker was clairvoyant, as he had no information on Laura aside from her name. No bank statement, no credit check, no nuthin’. But, promise he did, and we believed him.
Still, Laura decided she couldn’t afford the price of the car and we left, disappointed, only to rejoice a day later, when the company contacted her, dropping the price to one she felt comfortable with. She called the dealership and, although the first salesman nor the G.M. were available, Laura left a $500 deposit and was assured that the car was hers, at a price and interest rate she could manage.
Whereupon there was great singing and rejoicing. Until there wasn’t.
The next day, Laura received a “good news, bad news” email from the dealership. They had sold the car (bad news) but had refunded her deposit (good news). If she wanted to come in again, they would try and help her out. (Translation: Someone had come in and likely agreed to pay a higher price for the car, so they sold it.)
Laura was beside herself, which was nothing compared to the way her father and I felt. Remember, this is the kid for whom the simplest undertaking resembles crossing a minefield. So, like all hysterical parents, we went nuts. (Plus, Laura was at work and couldn’t exactly scream and swear into the phone in her office.)
My husband first spoke to the finance officer, who informed him that no one was authorized to promise any kind of interest rate without first vetting the applicant. Then when Dave finally got G.M. 666 on the phone, he was informed that we were overreacting. This was “just a car. It’s not that big of a deal.” At which point my husband responded, “Listen, you’ve obviously been doing this too long. This is my daughter’s first car. It’s a damn big deal. Maybe you should find something else to do.”
The bottom line is, she still doesn’t have a new car, although the dealership and 666 are kissing up intently, probably because we made such a fuss and everyone associated with Mazdas from here to California now knows our name.
In reality, it’s not the end of the world; she’ll get a car. But the experience did underscore some essential truths: Ask lots of questions. Get everything in writing. If it sounds too good to be true, it probably is. Stay away from people whose name reminds you of the devil. If you happen to be looking for a Mazda and find yourself in Willow Grove, PA, look somewhere else.
And finally, if given the choice between trusting a snake oil salesman or a car salesman, go with the snake oil.
Because buying a car is a very big deal, indeed.