I grew up with Italian grandparents from South Philadelphia. We lived the whole South Philly Italian experience including gravy, Sunday pasta dinners at 3 PM and everything, of course, home made.  And I loved it all–except the gnocchi.

Gnocchi (pronounced “nyucky” in the Americanized version of the word), are generally little football-shaped ovals of dough, made with either potato or ricotta cheese. And most of the time, they taste like little ovals of dough, or, as my husband (also with South Philly roots) says, “lead sinkers.”

So, when we decided to try Presto, a BYOB tucked into a space formerly occupied by a Saladworks in a strip mall in the Ocean Heights Shopping Center off Route 9 in Somers Point, NJ, the last thing I wanted to try was the house specialty–gnocchi.

Our waiter, one Dominic Marchiani, had other ideas. Dominic couldn’t have made our dining experience more authentic; despite being from Margate, Dominic’s veins run with South Philly blood. He was effusive about the menu offerings, especially the gnocchi. So, when in Rome…. 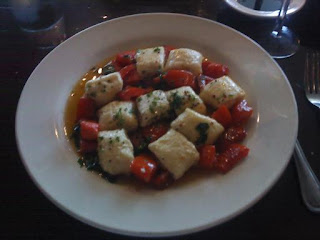 I opted for what I hoped would be a lighter version of what I fully expected would be just another plate of “lead sinkers,” choosing a basic tomato, olive oil and fresh basil sauce on the pasta.

Perfection! Never, after a lifetime of eating Italian food, have I ever tasted gnocchi like those hand made by chef David Salvo. The pillows of pasta, made with ricotta cheese, literally melted in my mouth.  Of course, there were many other offerings on the menu (especially a particularly fabulous appetizer of sausage and broccoli rabe), but why bother? It’s all about the gnocchi!

As chef and owner, David Salvo notes, “You’re only as good as your last meal.”

If I had to choose a last meal, I’m pretty sure it would be a plate of Presto’s gnocchi.

Should you find yourself at the Jersey shore and in the mood for something other than the standard touristy restaurant offerings, check out Presto at 29 Bethel Rd., Somers Point, NJ 08244, 609.927.0101. Open year around and making gnocchi to die for!