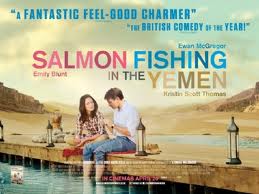 There’s not enough dreaming in the world these days.

The harsh realities of life over the past several years have conspired to keep most of us planted on terra firma, our hearts and imaginations too occupied with survival to allow much time for dreams.
So when, in the new release Salmon Fishing in the Yemen, a wealthy sheik decides to bring the peaceful, soul-stirring sport of salmon fishing to his desert home in the Yemen, the British fisheries expert coerced into making the project happen balks, flabbergasted that such a fool’s dream is even under discussion.
But the British Prime Minister’s press secretary, Patricia Maxwell (a determined, manipulative Kristin Scott Thomas), is not so easily dissuaded, insisting that Dr. Alfred Jones (Ewan McGregor) do whatever it takes to make the impossible happen.

Joining the staid, humorless Dr. Jones in this absurd enterprise is the sheik’s representative, Harriet Chetwode-Talbot (the fetching Emily Blunt), lovely and willing to indulge the sheik’s fantasy as well as to gently prod Dr. Jones to action.

Both Fred and Harriet bring wounded psyches to the project as well, which proceed to heal and blossom as the impossible begins to seem attainable. As the sheik proclaims, it is a project based on faith and the characters find that perhaps they have more of that rare gift than any of them first thought.

Salmon Fishing in the Yemen is a delightful, gentle film, rich with the obvious imagery of animals that instinctively run against the tide to fulfill their destinies and their human counterparts who must learn to do the same. The scenery is gorgeous, the characters engaging and the premise, although proclaimed by all involved to be untenable, proves once and for all that everyone needs to dream.