Spreading the "Crazy" Around 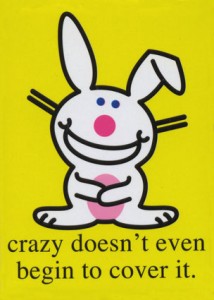 I’m enjoying many things about my kids getting older–not the least of which is that they now do their own laundry. But by far the most gratifying side effect of their maturing is their slowly dawning realization that their mother–me–is not the only “crazy” parent in the house.

It’s safe to say that every woman in the world who has a family has at some point been labeled “crazy” by her kids. Never mind that they, along with their fathers, are the ones who made us that way.

“I wasn’t like this before you people came along,” has been my standard line of defense for years, but it was always met with eye rolling and an unspoken “Yeah, right,” by my offspring. But lately, the tide has been turning, and it’s a beautiful thing to see.

The other night, middle daughter, Laura, and I were watching TV in the first floor family room when the phone rang. Laura picked it up.

“Hello? What? Uh…okaaaayyy. I’ll be right there,” she said, hanging up and shaking her head.

“Dad? Isn’t he in the basement watching television?”

“Yes. Yes, he is. At least he was watching television until he fell asleep laying on the couch. Now, he’s awake and he can’t find his glasses. He’s afraid to move because he thinks he might roll on them and crush them. But the phone was within reach, so he’s calling us, from the basement, to come down and help him find them,” Laura said.

I sighed, matching her head shake for shake. “Welcome to my nightmare,” I added.

We marched downstairs to find Dave stretched out on the couch, immobile, indeed afraid to move. And then we burst out laughing.

“I’m glad you’re enjoying this,” he said as we gasped to catch our breath. “Now help me find my glasses.”

Gingerly, Laura and I searched as best we could around Dave and in between the couch cushions. “Well, this is weird,” Laura noted as I smiled smugly. When satisfied that the glasses weren’t within rolling territory, Laura helped her father off the couch and, upon further exploration, produced the missing glasses, which had fallen into the back of the sofa.

“Oh, thank god!” Dave exclaimed. “Now watch out, I have to get upstairs!” he added, racing towards the steps. Laura and I followed, in time to find Dave emerging from the powder room.

“What are you doing now?” I asked.

“Well, when I woke up, I tried to find my glasses by myself because I needed to go to the bathroom. Then, when I couldn’t find them, I knew you two would make fun of me, so I waited another 20 minutes before I called for you to come and help me. So I really had to go,” he explained, sheepishly, heading back downstairs.

I crossed my arms, looking at my daughter. “Do I need to add anything, here?” I asked.

“No. I think I’m going to go upstairs now and try to forget about this,” she sighed, leaving the room with more head shaking.

I don’t think I’m ever going to escape the “crazy” tag, but at least now, I know I’m sharing it.