The Continuing Adventures of the KarTRASHians 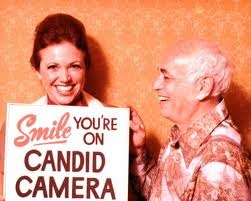 Are we all on Candid Camera?

You remember the premise; bizarre situations were set in motion on unsuspecting foils, whose reactions were then filmed for the rest of us to view. Hilarity ensued, mainly because we were in on the joke.

But now I’m starting to think we’re all players in some real-life version of the show, except this time, the joke’s on all of us.

How else to explain the continuing antics of the Kar“trash”ians, as well as Lindsay “Lowlife” Lohan and those knuckleheads from The Jersey Shore?

In case you missed it, (and if you blinked you might have), Kim Kardashian’s marriage is kaput. In a move that surprised no one (except the dope who married her), the dull-witted Kim filed for divorce last week from the clearly clueless Kris Humphries after a mere 72 days of wedded bliss.

The pair’s nauseatingly excessive nuptials cost an astounding ten million dollars. Let’s see, that comes out to a cost of roughly $139,000 per day. Of course, they were paid eighteen million for the media rights to the event, broadcast to the public a scant two weeks ago. So ultimately the pair has pocketed $111,111 each day of their shameful sham of a union.

I’m not sure what went wrong, although I suspect that Humphries making mention of moving his wife to his home in Minnesota may have had something to do with it. When Kimmy objected, saying, “How am I supposed to have my career in Minnesota?” Humphries responded by telling his beloved that by the time they moved back to Minnesota, it was likely that no one would even be thinking about her any more. Kim stared, stunned and aghast at the idea that the world would cease to be fascinated by her every idiotic move or utterance. You could almost hear the nails being hammered into the coffin of their union.

Since the filing, Kimmy has been making the media rounds attempting damage control, trying to dissuade the masses from thinking she’s little more than a money-grubbing con-woman. (How anyone could doubt her motives is beyond me. After all, look at her stellar track record. This is a woman famous for a sex tape.)

Quick cut to Lindsay Lohan, another train wreck whose behavior continues to leave observers speechless. Lindsay violated her parole again, not keeping court mandated appointments and the judge sentenced her to jail time, which is pretty much what would have happened to you or me had we done the same thing.

But wait! Little Lindsay’s lawyer asked the judge to postpone the starlet’s sentence so she could work. Work being shoot a spread (and I mean that literally) for Playboy Magazine. Of course the judge granted the request. Just like she also would have for you or me. (Update: Our gal Lindsay served a total of five hours in jail before she was released due to overcrowding. Yeah, exactly what would have happened to you or me.)

Finally, we have Vinny Guadagnino, one of the meatheads from that cultural beacon The Jersey Shore, guest lecturing at Columbia University last Wednesday. Columbia University. The Jersey Shore. The two phrases shouldn’t even be uttered in the same sentence. Sure, Vinny was there to speak on behalf of Do Something, an anti-bullying organization, but at least one student shared my sense of incredulity, obvious when she asked, “What gives you, as a cast member of ‘Jersey Shore,’ the right to interrupt this class and then lecture us on setting a good example?” Vinny had no response.

Which is pretty much how I feel whenever I try and come up with some reason why the American public keeps pouring money into the hands of these dolts. They are the worst of us, yet we continue to pad their pockets. Kind of makes you wonder who the real idiots are, doesn’t it?

At the end of every segment of Candid Camera, the show’s mastermind would surface, grinning at his unsuspecting victims and commanding, “Smile! You’re on Candid Camera!” at which point, the victims of the prank would laugh and sigh in relief.

I only hope we can someday do the same.