The Impossible–A Movie Review; Plus, Golden Globes This Sunday! 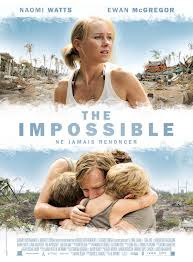 As a child, I loved “riding the waves” in the ocean at the Jersey shore. Stretching out my body and letting the water carry me into the beach was a thrill ride, without the price of a ticket on the boardwalk.

But every once in a while, a wave would come along that would overwhelm, crashing over my head and pulling me down to the sandy ocean floor, where it tossed and banged me around until I was able to scramble up towards the sun, gasping for air and stumbling back to the shore. Even now, the memory sends a shiver down my spine.

Those occasional battles at the beach always reminded me that I was, quite literally, in over my head against the power of the ocean. If you happened to be in the way when Mother Nature decided to send in a big wave, there was nothing you could do about it but hope you weren’t too bruised when you finally surfaced again.

In the profoundly wrenching movie, The Impossible, the viewer witnesses the ocean at its terrifying worst as the horrifying true-life tale of the 2004 tsunami is retold through the eyes of Maria and Henry Belon and their three sons, on vacation in Thailand over the Christmas holidays.

The Belons are clearly a family in love with each other, and their bond is established early in the film as the parents share intimate moments with their children and one another, making their wrenching separation all the more devastating as the giant wave hits the resort where they are at play, obliterating everything in its path.

Focusing on Maria and eldest son, Lucas, the first half of the film traces the pair’s harrowing attempts to reach each other across the churning water and then to get help once the water recedes, stranding them in the formerly lush landscape that resembles nothing so much as a field of matchsticks after the wave’s scourge. Maria is badly injured, and Lucas, only 10, bravely takes charge of getting his mother help.

Miraculously, husband Henry and younger sons, Thomas and Simon, also survive the tragedy, and Henry risks losing his young sons yet again through separation when he insists on remaining behind in the devastation to search for Maria and Lucas.

The Impossible is an extraordinary tale of love and bravery, and it manages what appears “impossible”–to scale down a story of such epic loss and pain into one that allows the audience to relate to it on an intimate, personal level.

Yet the movie is not for the faint of heart. The re-enactment of the wave’s impact and aftermath, complete with underwater shots of characters being pummeled by water and debris, leaves the viewer gasping for breath as well, and the overwhelming devastation is difficult to see.

But giving the movie its heart as a mother literally hanging onto life for her son, Naomi Watts is brilliant and heartbreaking as Maria. Likewise, Ewan McGregor as Henry, crushed by the loss of his family, and Tom Holland as Lucas, touch the soul with extraordinary performances.

Of course, The Impossible leaves the viewer with a profound sense of loss, but it also applies a bittersweet balm with the power of love.

Now, on a lighter note… 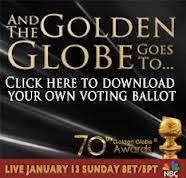 The Globes, as detailed in last year’s “Losing Control with the Golden Globes” column, are the Oscar’s drunken relative, complete with stars behaving badly (and occasionally, drunkenly), which is exactly what makes them fun.

No formal seating arrangements here; attendees sit at tables with friends (or foes–anything can happen at the Globes) eating and, more publicly, drinking throughout the show.

A raucous, uninhibited party, the Globes have, in recent years, been hosted by the acerbic and sometimes, even for the Globes, over-the-top, Ricky Gervais, who mercilessly skewered attendees, often making for squirm-inducing viewing. I have to say, even though it’s nice to see mega-watt superstars being made fun of, Gervais often carried the ribbing too far. This year, I’m hoping that co-hosts Tina Fey and Amy Pohler will bring a fun, silly, but less stinging brand of humor to the proceedings.

Either way, with the celebration of the Golden Globes’ 70th anniversary, the show promises to be a fitting launch to Hollywood’s annual awards season, where we mere mortals get to watch as the glitterati strut their stuff in gorgeous gowns and jewels, congratulating themselves on their awesomeness, while the rest of us live vicariously through them decked out in sweats on our couches.

I, for one, can hardly wait.