The Lying Game / The Ringer 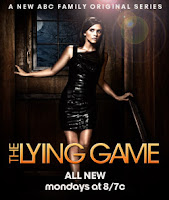 The concept of twins impersonating one another, so very popular in soap operas, has been around for a long, long time, as far back as the classics it seems, and this season it returns to prime time TV on two new shows: The Lying Game (ABC Fam, Mondays at 8/7c) and Ringer (CW57, Tuesdays 9/8c).
I started watching The Lying Game some weeks back and got hooked. It’s a light fantasy that takes place, once again, in high school, and concerns rich girls and their rivalries on clothes and boyfriends.
The twins in question, played by Alexandra Chando, were separated at birth and while one, Sutton, was adopted by a rich family, the other, Emma, fell into foster care. As the plot plays, when Sutton decides to go to LA to look for their birth mother, sweet Emma takes her place. How Emma manages to convince parents, sister and best friends that she is Sutton is beyond me. Only Ethan, the bad boy/secret boyfriend realizes Emma is not Sutton. How? He kisses her, of course.
Regardless of the impossibility of the premise, I enjoy the show which is based on the novel of the same title by Sara Shepard, the author of the widely successful ABC Fam TV show Pretty Little Liars.
I met Sara Shepard, who grew up in northern Philly, a couple of years ago at a book signing at Harleysville Books. 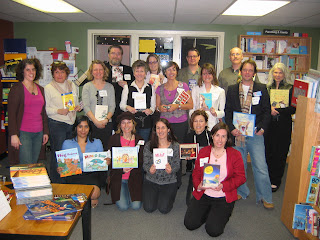 In the picture above you can see Mary Fran, Chrysa and me at the event with Sara Shepard (in the white shirt).

The Ringer has an even more preposterous premise.
The twins, in this case, are in their twenties. Bridget, the first we meet, is a recovered drug addict and stripper who was supposed to testify against a bad guy (he killed his own brother we are told). Instead, she runs away to her twin’s house in the Hamptons.
The rich twin, Siobhan, disappears in the ocean and Bridget decides to take her place. The list of people to deceive in this case includes, Siobhan’ husband, her teenage stepdaughter, her best friend and said best friend’s husband who happens to be her lover. And to pepper up the plot, someone is trying to kill Siobhan too, or is it Bridget they are after?

Don’t know, don’t care. To be confused is part of the experience, the reason I will be back to watch the show next week. It’s brainless entertainment, no doubt about it, but fun nevertheless.
Besides the role of twins is played by Sarah Michelle Gellar, the one and only Buffy. And before you think I am again acting below my age, let me remind you that Buffy the Vampire Slayer has been the subject of more academic books and papers than any other TV show in history.
Other actors I recognized from previous shows are: Nestor Carbonell (Richard in Lost (https://www.notreadyforgrannypanties.com/2010/04/lost-in-glee.html)) and Kristoffer Polaha (Lux’s father in Life Unexpected (https://www.notreadyforgrannypanties.com/2010/05/life-unexpected.html)).
Britt Robertson who played Lux in Life Unexpected has a new show also in the CW57. It’s called The Secret Circle and I will review it next week.
Mary Fran Bontempo2018-10-30T09:54:28-04:00September 16th, 2011|1 Comment