Turning on the Thought Bubbles

To listen to the audio podcast of today’s column, click the play arrow below. 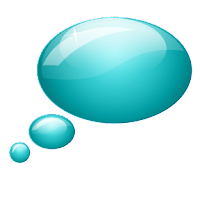 A filter is a valuable thing.

Technically a filter is used to remove impurities, giving it any number of applications. It can help appliances run more efficiently. When my son complained last September that the dryer was no longer drying his clothes, I had only to pull the filter and remove the two inch thick swath of lint that had built up since June to solve the problem. (This despite the sign I had affixed to the device which proclaimed in capital letters, “GUYS, CLEAN THE LINT FILTER!”)

In cooking, foods are often strained through a filter to capture the best essence of the item and leave the unnecessary bits that may have added to the flavor, but are inedible. For example, no one likes to chew their coffee, so the grounds are caught in a filter and disposed of.

And current technology employs filters to guard us from the relentless deluge of spam which would drown us in email junk without them. (For some reason, though, my husband still receives daily propositions from strange foreign women who claim to be in love with him. I’ve tried to adjust his security settings, but it still happens. Hmmm….)

For all the practical, obvious uses of a filter, however, we humans are still often oblivious as to its personal functions. Witness Natalie Munroe, the Bucks County teacher who last week was suspended from her position for posting less than flattering remarks about students on her personal blog.

I’ve been a teacher. I know what it’s like to stand up in front of a classroom full of tired, bored kids trying to teach them why, for example, writing is important. I get that they can drive you nuts.

But I also get that, even thought you might think one of your students is “frightfully dim,” it’s probably best to keep that comment inside of your head, not splattered all over the internet.

Hence the best use of a filter which most people routinely ignore, especially where the internet is concerned.

Remember in comic strips, when a character was thinking something rather than saying it out loud, indicated by a string of little bubbles leading up to the big thought bubble above the character’s head? The other characters, even though they were in the same frame as the “thinker,” didn’t know what was going on inside of her head. Natalie Munroe should have used a bubble filter before typing out her darkest thoughts about her kids on a computer.

In fact, let’s take the filter idea beyond the internet. How about instead of everyone saying everything that pops into their heads, we all employ our own personal filters and run our ideas through them before speaking, or typing?

It’s hardly a new concept. How many times did your mother tell you to “Think before you speak”? Back then, of course, we didn’t have instantaneous communication. It actually took more than a few seconds before some idiotic pronouncement spread throughout the entire world to damn the speaker’s lack of discretion. Even if we did say something stupid, usually, we had the time to do a little damage control. These days, the moment we blather something inane or worse, mean, it’s passed around the globe almost at the speed of light.

All the more reason to filter our ramblings. Honesty is one thing, but destructive commentary not only hurts the target, it usually comes back to bite the speaker as well.

In other words, for your own sake as well as everyone else’s, keep your spam to yourself.