When "Less" Really is More 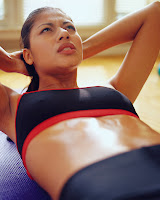 Did someone pay them to figure this out?

In a study that I’m certain will be up for Pulitzer Prize consideration, researchers at Penn State University have decreed that middle aged women are “happier with moderate exercise” as opposed to vigorous exercise. Apparently, the study found that women felt less stressed, less anxious and less depressed after less strenuous exercise.

Of course, if they were really concerned about how happy we are, they’d have discovered that what really floats our boat is NO exercise. Give us permission to bag the whole sweating, grunting, groaning enterprise and we’ll be ecstatic.

As it is, though, there is a common theme, and I plan to cling to it white-knuckled for the remainder of my days. In a world where more is presumably always better, the operative word, is LESS. Less strenuous, moderate exercise.

Lead researcher, Steriani Elvasky reached her brilliant conclusion after dividing women into two groups. Those who figuratively drew the short straw were set up on a challenging treadmill program, one which left them huffing and puffing and presumably, drenched in sweat. The other women, also on a treadmill, were allowed to set their own pace, exercising in a way that “would allow you to talk in short sentences…but would not allow you to sing.”

Does anyone need a formal experiment to tell them which group of gals is going to be happier? And remember, we’re talking about exercising here. Who the heck is singing about it?

The study further notes that “Overall, women who did moderate exercise…showed decreased feelings of sadness and anxiety than the vigorous exercise group.”

Then there’s this gem: “Exercise is going to make you feel better but it is going to be more pleasant when performed at moderate intensity as compared to vigorous, especially when you have been previously inactive or may be overweight.’” Astonishing.

I’ve been exercising for years. I started working out regularly while I was pregnant with my youngest, when I developed high blood pressure, which hasn’t gone away since. (After three kids, that surprises no one.) I exercise for health reasons, and I hate every minute of it.

It’s boring, it’s time consuming and it’s uncomfortable. Over the years, I’ve tried running, walking, weight training, yoga, Zumba, Pilates, Tae-Bo and more. I’ve had gym memberships, bought training systems, DVDs and watched workout shows on television. Nothing makes it pleasant. And for as long as I’ve been at it, I’ve been under the impression that in order for it to do any good, I had to be completely miserable and killing myself.

But thanks to Ms. Elvasky and her team, I now have scientific proof that I’m better off turning down the burn. From now on, instead of working up a sweat, I’m going to relax, slow the pace and who knows, maybe even sing a few bars while I’m working out.

Come to think of it, Ms. Elvasky might deserve that Pulitzer after all. And if she’s looking for any other theories to test, I’m sure she could prove that middle aged women are also happier doing less housework, less cooking, less laundry…the possibilities are endless.

Oh, and Ms. Elvasky? When you’re in need of test subjects, sign me up. For the “less” group, of course.