A Scary Case of Decorating Overload 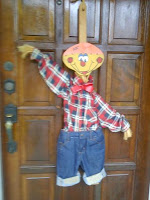 She’s out of control.

When my kids were little (emphasis on the word, “little”) I went crazy decorating on holidays, giving Clark Griswold a run for his money, and not just on Christmas. Every conceivable reason to decorate the house was indulged, resulting in rooms that looked like they literally threw up the holiday in question on all available surfaces–tabletops, windows, doors, walls–you name it.
But as the kids grew and their enthusiasm for the decorating process waned, I scaled back, content with a few pumpkins on Halloween and some colored eggs in a basket on Easter. Christmas demanded a bit more, but much less than days gone by .
Frankly, it was a relief. Navigating around the multitude of excess crap for close to a month, tripping over stuff, exponentially multiplying cleaning time to accommodate the additional junk–it was all just too much. I was glad to be done.
That is, I thought I was done. But apparently, decorating addiction is an inherited disease. And my daughter has it.
A few weeks ago, with Halloween on the horizon, Megan, home from school after college, announced that she would be taking up the decorating mantle. Okay, I thought, she’ll put a few things around, it will look festive and I won’t have to do it. Awesome.
But Meg had other ideas. She started with a scarecrow and witch on the front door, a few silk garlands of autumn leaves across the fireplace and TV cabinet and a group of little skulls marching up the stairs. Just enough. 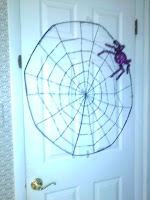 Then she moved onto paper decorations taped to the windows and mirrors, a witch on the toilet tank in the powder room, a ghost in the upstairs bathroom and pumpkins in the family room and living room. Okay, a bit much, but she’s done. It’s all good.
Until she went to the dollar store on Sunday and came home with a giant spider perched on its web now taking up residence in the kitchen, a large purple skeleton tacked to the wall in the family room, a witch appearing to rise from tombstones at the front door and a ghost on the dishwasher. 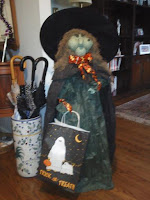 Plus the garland of ghosts around the hall mirror, another group dancing across the living room bookshelves, spider webs on the hall table’s family photos and the outside bushes, the four foot witch in the hall, the pumpkin on the bench out front and the scarecrow on the hearth.
She was sitting on the floor, pulling still more stuff out of her dollar store bag when her father pronounced her out of control, at which point she grinned and started talking about getting lights.
It’s decorating on steroids. I don’t know what the cure is, but I hope we find one soon. If she’s this bad come Christmas, I may have to have her committed.
Or maybe I’ll just send myself away for a while. Because right about now, a spare, sparse, sterile, white room sounds like a little slice of heaven.