Anne Hathaway and Her Perky Friends 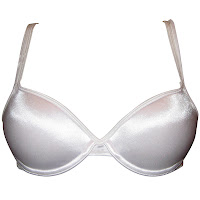 That Anne Hathaway. She’s a perky little thing, isn’t she?

Well, part of her is perky. Make that parts. Two parts, specifically, standing at attention in all of their perky glory at the Oscars Sunday night.

Adding her name to a long list of “really rich women who for some reason forget to look in their mirrors before leaving home and show up at awards shows in really awful dresses,” Hathaway took this year’s “Oh my god, what was she thinking” prize when she and her boobs appeared at the Oscars in an ill fitting dress with darts that appeared constructed to intentionally point directly to Annie’s…well, nipples.

In ABC’s before the red carpet show, Hathaway was interviewed by Kristin Chenowith (who, despite her glorious singing voice has one of the most grating speaking voices on record) in a pre-Oscar program designed to showcase the stars’ red carpet fashion. Chenowith and Hathaway spoke for several minutes, but I have no idea what either said, as I couldn’t take my eyes off Anne’s chest.

I doubt Hathaway intended to add an NC-17 element on what turned out to be her big night, but her breasts were driving the evening on their own terms.

Standing at attention and pointing like a hound that’s just flushed out a pheasant when Hathaway was still, the happy-go-lucky girls bounced and flounced around when she mounted the stage steps to accept her Supporting Actress Oscar. Apparently, there wasn’t enough money left after making the dress to put a bra in it. (I’ll bet that little statue was smiling from ear-to-ear while being clutched to Annie’s chest after she won.)

There are red carpet dresses designed to flaunt stars’ assets. Think J-Lo’s slit to the navel green Versace creation from the 2000 Grammy awards. While that dress was awful, at least it was designed that way. We were supposed to gasp in horror when we saw it.

Unfortunately, Hathaway’s dress was meant to be breathtaking, but ended up looking like some fifteen-year-old’s Home Ec project. Grade: D.

The thing that most befuddles me? Hathaway said that her mother had seen the dress, refering to it as something in front (I can’t remember exactly what she said, I was looking at her boobs) and a party in the back.

Why the heck didn’t her mother say something? Something along the lines of, “Oh my god, you cannot possibly wear that! Everyone can see your nipples!” I mean, isn’t that what mothers do–mortify their children for their own good? Better to be mortified in private by mom than in front of a billion people on television.

Still, I suppose women everywhere should thank Hathaway. One of the great things about awards shows is that some star always does something ridiculous that makes we mere mortal women feel just a little bit better about ourselves.

This year, it was Anne. Or more accurately, her perky boobs–of which I am a bit envious, of course. Maybe she was right to show them off. She’s young, just married, no kids.

Enjoy it while it lasts, Annie. Trust me, they won’t look like that forever.