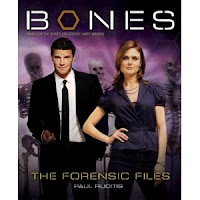 by Carmen Ferreiro-Esteban
If there were a show on TV where I would like to live, it would be Bones (Fox Network, 2005-to present Thursdays at 9 PM/8PM central).
And it is not only, as you may be thinking, because David Boreanaz (formerly Angel in Buffy the Vampire Slayer) is one of the main leads. Rather, it’s because it portrays strong female characters.
The world depicted in Bones is a world where women are allowed to be smart, and cool, and successful and still get the guy. These are strong women who are not defined by their male love interest, or are trying to imitate or behave like men. They are women who are strong, yet clearly feminine. Even more, they are strong because (and not despite the fact that) they are women.
In other words, they personify what I had been struggling to define, to become since, as a child, I was told women were irrational, stupid, and weak.
But don’t think from my above musings that Bones is a boring show about feminism. Far from it. Every week the main characters, Booth (David Boreanaz, an FBI agent) and Bones (Emily Deschanel, a forensic anthropologist) solve a case by, mainly, examining the bones of the victim.
Bones and her team work in the fictional Jeffersonian Institute Forensic Sciences Department in Washington DC. I worked as a biological researcher long ago and, believe me, this would have been my dream lab.
Other characters include Angela, an artist and computer expert who produces accurate drawings and computer reproductions of the victims’ faces from their skulls. She also creates cool holograms that reproduce the crime scenes, by playing with the data they have deduced from the victim’s wounds. Angela is a free spirit and has the most unorthodox father ever, played by one of the members of the band, ZZ Top.
Dr. Jack Hodgins, the entomologist of the team, can tell where the crime took place by looking at bugs or minerals and is totally in love with Angela.
Also in the team are: Dr. Sweets, the psychologist, and his intense girlfriend, Camille, a pathologist and the boss, and a string of quirky characters as Dr. Bones’s assistants whose interactions with the main characters are often hilarious.
As many other shows with boy/girl as partners in solving crimes, there is an obvious attraction between Booth and Bones that creates a sexual tension which carries through the seasons. What makes Bones different is that the relationship has skewed the stereotypes. It is the female character, Bones, who is brainy and awkward with people, and Booth who is the sensitive one, has a strong empathy for people’s feelings and believes in love and marriage.
Overall this show portrays women with respect. And, on top of being super smart, they are also beautiful, can work in a lab in designer clothes without getting dirty, in high heels without getting tired and their hair is always perfect. Who can ask for more?
Mary Fran Bontempo2018-10-30T09:56:21-04:00March 18th, 2011|2 Comments