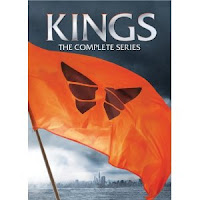 I love stories. That is why I’m a writer. And the story behind Kings, a TV show that ran last year on NBC, is one of the best I have seen on TV in a long time.

Kings tells the story of David, the shepherd boy who defeated the giant Goliath with a sling. A story most of us know from reading it in the Bible when we were children, but retold in a modern setting: in a country called Gilboa (Israel comes to mind) caught in an unending war with its northern neighbor Gath.

In this retelling, Goliah is a tank. And David is the young farmer turned soldier that blows up the tank in the pilot episode. He also rescues the king’s son and by doing so, is thrown into the web of intrigues of palace life, as he blindly at first, cautiously later, follows the orders of the king he worships. A king blessed by God to Whom he talks through rain and thunder. Until the day David comes. King Silas knows his time is over, but won’t step aside and will eventually defy God Himself to stay in power.

Not only I find the story brilliant, the dialogue is smart and haunting.

“We give up what we want when we want power,” King Silas tells his son, chewing the words and then spitting them in a pitch perfect delivery.

“The mother of the hero,” he tells David’s Mother.

“The hero of my son,” David’s mother answers, returning her king’s stare unperturbed.

“You can have whatever you want,” the king offers David, “even the proverbial half of my kingdom.” Then as the boy’s eyes fall on his daughter, “Half my kingdom it is.”

There is not a simplistic distinction between good and evil in Kings. All the characters are written as complex human beings, from the wide eyed innocent Shepherd (David’s last name) to the queen’s nephew (a perfectly disturbing Culkin Macaulay of Home Alone fame).

Kings is a fascinating story of greed and love, trust and betrayal. It is storytelling at its best.