Ah, the joys of a happy accident.

If you’re lucky, you’ll get to experience one of those moments when everything seems to click. You know you’re in exactly the right place at just the right time. 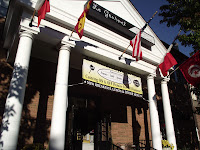 So it was several weeks ago when my husband and I found ourselves slightly lost and hungry after driving down an unfamiliar road in North Wales, PA. We’d come from a college field hockey game and decided to do some exploring, hoping to find a decent place to grab a quick meal.

But the pickings were slim and the one place we passed didn’t appear to have much happening in the way of foot traffic, which was a bit off-putting. Realizing that perhaps the late hour—3:00 for lunch—had something to do with the lack of activity, we turned around, parked and through an unassuming doorway, discovered a slice of heaven on earth.
﻿

﻿ Le Gourmet European Bistro & Catering is a BYOB owned and operated by Chef Nadir and his wife Deborah, an interior designer whose hand is evident in the warm, welcoming décor. Dave and I walked into an empty dining room, save for one lone male diner (more on that later) sitting in the back of the room, and were greeted by Chef Nadir, a tall, ever-smiling figure who cheerfully informed us that while he was preparing for the dinner crowd, he would be most happy to prepare lunch for us.

And then the experience began. From an amazingly eclectic menu featuring a Greek, Italian and American fare, Dave, noting he had family in New Orleans, chose a Shrimp Po’ Boy sandwich while Chef Nadir confirmed my selection of Pollo Taormina (chicken breast, roasted eggplant mousse, fresh mozzarella and a light tomato sauce on a baguette) as the perfect one. (The dish is also available as a dinner entrée without the baguette, as are many selections.) 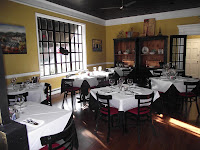 Disappearing into the kitchen, the chef returned with a large dish of jambalaya, which he was preparing for dinner, correctly guessing that it was one of Dave’s favorites. A perfect blend of chicken, sausage, peppers, onions, spice and rice, we all but licked the plate clean. And while we enjoyed our sandwiches, Chef Nadir filled us in on the colorful, interesting journey which culminated in the founding of Le Gourmet European Bistro in 2008.

A native of Tunisia, the chef studied his culinary craft in Italy, apprenticing in France and Spain. After coming to the United States, Chef Nadir opened restaurants in Charleston, S.C., and New Orleans. Upon marrying wife Deborah, Chef Nadir brought his impressive culinary skills to first Bucks and now Montgomery County.
﻿

﻿ But despite the location, the vibe is most definitely European. Chef Nadir creates daily specials which showcase the freshest of ingredients. The intention is to provide diners with “the whole experience” of the best a chef can offer. As Nadir notes, “The menu is excellent, but the specials allow the customer to experience the level of the chef,” attained when the chef is free to experiment and create based on fresh ingredients available. Many of the chef’s customers allow him to create for them, trusting his impeccable palate and skill.

As for the lone other diner in the restaurant? We noticed the man leave without paying a bill while the chef was in the kitchen. When we pointed out what had happened, Chef Nadir simply smiled. “Hey, he walked in here and said he was hungry but he didn’t have any money. I had to feed him. God obviously sent him to me for a reason. God’s been good to me so I pay it back whenever I can.”

A glorious meal with food for the spirit and soul as well. Like I said, a slice of heaven on earth.

Le Gourmet Bistro is located at 115 S. Main St. in North Wales, PA. Phone 267-613-8065. The restaurant offers a catering and take out menu and dinner entrees are also available in lunch portions. Check out the website at http://www.bistrolegourmet.com/ for menu details.