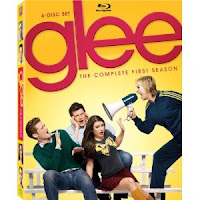 I’m a sucker for a show tune.

As a kid, I never played sports, instead performing in school plays to find a safe haven in my teen years.  So last year, when I heard about a television program that was centered around a high school choir, of course I tuned in.  Now, a full year later, I’ll say it loud and I’ll say it proud:

Fox television’s Glee follows the adventures of a lovable cast of misfits as they sing their way through the ups and downs of high school life.  However, unlike shows that pander to more salacious interests (90210, Gossip Girl, the new Hellcats–pick one), Glee tends to leave one with a sweet aftertaste, as opposed to a pucker of disapproval.

That’s not to say it’s an updated version of The Lawrence Welk Show.  (I can’t even believe I used that as a reference.  I really am old–sigh.)  Year one (now out on DVD) profiled one character’s teenage pregnancy, the bullying of a gay choir member and marital strife and separation between the choir director and his wife, among other delicate subjects.  But no matter the crisis, somehow there was always a song, along with full orchestral accompaniment, costumes and choreography–part of the show’s tongue in cheek approach–to ease the way.

The songs run the musical gamut, from the expected show tunes to classic rock to modern pop, as highlighted in a recent Britney Spears tribute as well as last season’s wild homage to Lady Gaga.  (Come to think of it, the Britney Spears episode was a bit over the top in the sexy vibe department, but generally, musical numbers portray the innocence and longing of youth, not the panting.)

More interesting is the way the show taps into the place where music gets us–the heart–and utilizes even familiar songs in new ways to move the story along.  A recent episode featured Kurt, a gay teenage boy, struggling to come to terms with his father’s heart attack.  His tribute to his father was a moving, slow rendition of The Beatles’ I Wanna Hold Your Hand, hardly a tune one would expect to move a viewer to tears, but that’s what it did for me.  (See the clip, below.)

In the same program, hilariously titled Grilled Cheesus, http://www.fox.com/glee/full-episodes/625454625001  other young characters explored and questioned their spirituality.  Featured  songs included Billy Joel’s Only the Good Die Young, REM’s Losing My Religion and a gospel version of Simon and Garfunkel’s Bridge Over Troubled Water.  Nothing preachy, more than a few giggles plus great music and touching perfomances, especially when Jane Lych’s Sue Sylvester softens her hard as nails attitude at the show’s end.

If you haven’t yet checked out the glee club on Glee (Tuesdays at 8 PM on Fox), you’re missing out.  It’s warm, funny, over the top, and there’s always a song worthy of a sing-along.  And like I said, I’m a sucker for a show tune.  Enjoy!